Accelerator Mass Spectrometry with 15UD Pelletron at IUAC is first AMS facility in India for the detection of 10Be and 26Al . This facility is now open for users to carry out 10Be and 26Al measurement work. 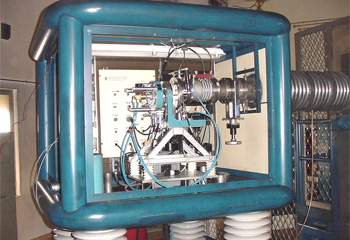 Multi-Cathode Source of Negative Ion by Cs Sputtering (MC-SNICS) is capable of holding 40 cathodes. Cathode holder can be rotated in both ways from control room. Bidirectional motion and quick change of cathodes is necessary in AMS measurement for changing standard and AMS sample quickly to neglect accelerator parameter variation effect between different measurements.

IUAC Pelletron facility is equipped with foil stripper and gas stripper assembly. For AMS studies, transmission through the accelerator should be optimum. Gas stripper produces less divergence after stripping compared to foil stripper. Transmission also reduces by scattering of beam by gas molecules in accelerating tubes. So good vacuum should be maintained in these tubes. Therefore a new re-circulating turbo molecular pump - based pumping system has been designed and installed in the high - voltage terminal of the accelerator. This helps in improving beam transmission by maintaining good vacuum in the accelerating tubes while holding required gas pressures in the stripping area. 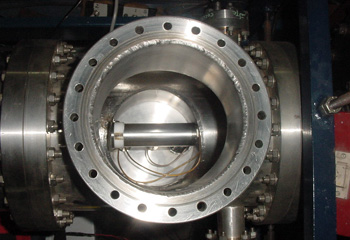 Off-Set Faraday is installed after the analyser magnet. It is used to count stable isotopes which follows different trajectory after passing through analyser magnet in the case of simultaneous injection of both isotopes.

For example In the case of Be-10 measurement both 10Be17O- and 9Be17O- are injected simultaneously by selecting mass 26 in the injector magnet and that after acceleration17O5+ which is representative of 9Be current, is collected in the off-Set Faraday cup.

Off-Set Faraday cup is fitted with linear motion feed through and port aligner to make sure that all the stable ion beam should be collected in the Cup. 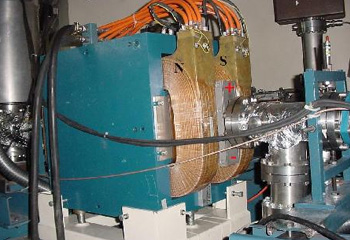 Stripping can also happen at the places other than terminal by residual gas molecules inside the accelerating tube. These ions may not have the assumed value of kinetic energy T and accidentally can match the MT/q2 and can not be rejected by the analyser magnet. Stable isotope can also come by scattering off chamber walls of the magnet or residual gas molecules, because they are much more abundant. All these unwanted entities can be separated by the Wien filter (T/M selection).

In Wien filter electric field E and magnetic field B are oriented at right angle to each other and perpendicular to the direction of motion of the ions. Wien filter transmits only those ions having a particular velocity, which is tuned with electric and magnetic field inside the Wien filter given by v = E / B. All other unwanted ions are deflected from the central path which are later intercepted by the slit installed before the detector. 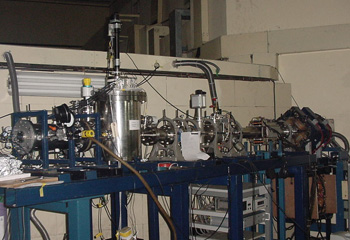 Gas cell Absorber is installed after the AMS Chamber and before the MAGIC detector. It is used for stopping 10B, the isobar of 10Be before detector. Gas cell absorber and AMS chamber is separated by 6 micro meter myler. For absorbing 40MeV 10B, 220 milli bar pressure of N2gas is required in gas cell absorber.

Multi - Anode Gas Ionization Detector is used to count rare isotopes after identification as having correct Z (atomic no.) and M (mass). IUAC MAGIC Detector system consists of 5 sections of anode(2cm, 5cm, 5cm, 5cm, 10.6 cm having 1 mm gap from each other), one cathode and frisch grid. The frisch grid is kept at ground potential. It is used to ensure that the size of the induced pulse on the anodes is independent of lateral position of ionization event inside the detector.All the feed through connections are taken on the back flange of the detector through LEMO sockets. On the front flange of detector, myler window of 6 micro meter thickness is present for holding the gas inside the detector and to slow down some impurities.

Iso-butane gas is used as counter medium. Gas input and output connections are taken through two KF-16 ports. Two similar ports are also present for By-Pass valve and Vacuum dial gauge. One rotary pump is used at the outlet port to take out the gas from the detector for maintain the pressure.

In AMS the isotope of interest is filtered (separated) from interfering isotopes at various levels. Chemical processing is the first filtering stage. During this stage the isotope of interest is separated from various elements present in the sample and converted in a suitable chemical form to produce high ion yield from the ion source. Chemical processing of sample also provide uniform matrix for analysis and reduces the mass of sample to be put in the ion source and thereby reduces the time needed to attain a given level of precision. Sometimes specific chemical form of the radionuclide reduces isobaric background.

A clean chemistry laboratory has been recently developed for sample processing. The laboratory is a metal free and equipped with all modern instruments. The lab has been designed to be kept at a positive pressure than the atmosphere with the clean air of about 6000 class. Laminar Flow stations of about 100 class air environment are being utilized for performing the column chemistry for samples processing.

10Be and 26Al AMS measurement faculties are available at IUAC. Clean chemistry laboratory is also available for the processing of geological samples. Once the user get the beam time allotted, can utilize the AMS facility. For beam time related queries Accelerator user committee can be contacted.

How and When to Apply for Beam Time at IUAC

To avail Pelletron Beam time, one must submit Beam time proposals by filling one of the Beam Time Request (BTR) Form (in prescribed formats, see below) with in the stipulated dates (May 31 for July AUC / November 10 for December AUC ) to the  AUC Convenor . If invited, they should present it before the Accelerator User Committee Members during the AUC Meeting on July 6-7 or December 17-18

Note : Simultaneous submission of BTR2 & BTR3 will not be entertained.

The 15 UD Pelletron at IUAC is a vertical tandem electrostatic accelerator. Negative ions from the ion source are pre-accelerated, mass analyzed and injected at energy of 250 to 350 KeV into the accelerator. At the terminal they are stripped to various charge states (q) by foil or gas stripper. These positive ions then get repelled by the terminal to gain further energy which is then energy analyzed by an analyzer magnet (1.8 m radius) and can be delivered in seven beam lines by using a switching magnet.

The different ion species which are available including those delivered in this year (2003-04) are as shown below. Typical delivered beam current at FC-04, after energy analyzer magnet are also shown.A continuous beam development program has been chalked out to further increase the variety of beams available through Pelletron.

* These beams may not be immediately available as the material is not in powder form.

Hostel and Guest houses are available on the campus. Booking has to be done in advance for convenience and visit has to get approval before actual arrival. A canteen, TV room and other facilities are available.For accommodation booking, contact academic@iuac.res.in

AMS group of IUAC has been sanctioned and funded a project by Ministry of Earth Sciences to set up Radiocarbon AMS facility. A dedicated accelerator is planned to procure for this facility. For the sample processing prior to the 14C AMS measurement, a graphitization laboratory will also be developed.

Queries For Queries Related to Ams

Queries related to AMS can be sent to S Chopra at chopra@iuac.res.in OR P Kumar at pkb@iuac.res.in