The Health Physics Group in the Centre was set up primarily for monitoring and ensuring radiation safety of the Accelerator facility as is mandatory by the Atomic Energy Regulatory Board. The activities of the group have grown in the direction of radiation research beyond the routine regulatory duties. Over a decade, this group has produced excellent support towards radiation safety. There are around 20 universities and around 30 research scholars, working with the health Physics group on various interdisciplinary research activities. A few NGO's and some Government Agencies have also used these facilities. The universities associated with this group are from all over the country. We are putting our best efforts to make these activities par excellence in co-ordination with the Atomic Energy Regulatory Board (AERB) and the various universities involved with the health physics group.

The intense ion beam accelerated to high energies by the accelerator is itself a very strong source of radiation though this is not of much consequence as the ion beam gets invariably stopped inside the vacuum system.

When the ion beam hits various parts of the vacuum system, target, etc. Secondary Radiation (mainly in the form of neutrons and gamma/X-rays) may be produced due to the nuclear reaction.

The Radioactive Nuclei may be produced when materials get irradiated either by the ion beam (primary beam) or the secondary radiation. The radiation emitted by this Induced Radioactivity may consist of electrons, positrons, particles, X-rays, gamma rays or combination of these rays.

The Accelerator laboratories are not accessible to a casual visitor. This is to avoid any exposure of the radiation to a person not being monitored for radiation.

When Beam is 'OFF'

There are no restricted areas for the lab staff when beam is 'OFF' excepting some of the areas which may have been found to have some significant residual activity during the regular area monitoring done by the Health Physics Group of the centre.

When Beam is 'ON'

There are radiation areas through which beam is passing and these areas are not accessible to any person. These areas are well shielded and properly interlocked to avoid any exposure to the lab workers.

With the radiation protection inbuilt in the system at iuac, the member of the staff and users will receive little or no exposure. However, regular personnel monitoring is necessary for every worker having access to the radiation areas. 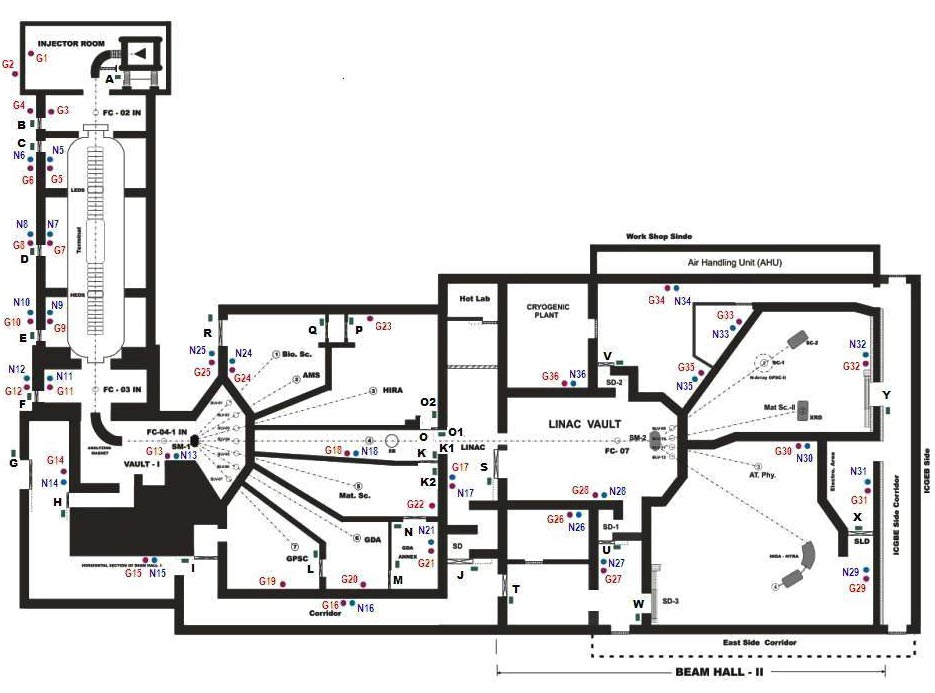 The complete NLK System, Doors, Display Board along with the Radiation Monitors

Nobody should enter Tower, Beam Hall, Vault Area, and other radiation areas without TLD badge or pocket dosimeter. Users must consult the control room before going into the beam hall.

It is the responsibility of each radiation worker to keep the dose to themselves and the people around them: ALARA (As low as reasonably achievable).

General consensus among experts is that some radiation risks are related to radiation dose by a linear, no-threshold model. This model is accepted by the NRC since it appears to be the most conservative.

The risk does not start at 0 because there is some risk of cancer, even with no occupational exposure. The slope of the line just means that a person that receives 5 rems in a year incurs 10 times as much risk as a person that receives 0.5 rems in a year. Exposure to radiation is not a guarantee of harm. However, because of the linear, no-threshold model, more exposure means more risk, and there is no dose of radiation so small that it will not have some effect.

Kodak Nuclear Track Emulsion type A (NTA) films are used. Fast neutron on undergoing elastic collision with content of the emulsion or the cellulose acetate base material produce recoil protons which are recorded as photographic tracks in the emulsion. The track density is a linear function of the dose

Film and TLD badges must be kept in good condition. Both badges are usually processed every three months from BARC, Mumbai. The results are made available to the worker and are required by legislation to be kept by the IUAC for a period of at least 50 years after the last entry. The Health Physicist maintains a cumulative record of neutron film badge and TLD badge/pocket dosimeter doses for all registered users. Personal monitors are not transferable and should never be exchanged between individuals. These badges may give inaccurate assessment if subjected to pressure (finger nails, bending, ballpoint pens); wetting or laundering; exposure to extreme heat; some chemical vapours which can damage the card; storage near radioactive materials or X-ray equipment.

This is a compact battery operated, direct reading electronic pocket dosimeter, which incorporates a semiconductor detector. The instrument shows a dose or dose rate on a large 4-digit LCD. An accumulated dose can be stored and returned to zero by reset operation.

Radioactive Sources & its Safe Handling in the Lab