Heavy Ion Radiation Biology is an interdisciplinary applied science involving Atomic and Nuclear Physics, Molecular Biology and Biochemistry. The current research in this field investigates the effects of accelerated charged particles on the biological systems at the molecular level. In that sense, the research field that is intended to be pursued at IUAC may be termed Molecular Radiation Biology.

The Radiation Biology research facility in terms of a dedicated beam line and a molecular biology laboratory is very much suitable for carrying out fundamental research in this field keeping up pace with the other laboratories in the world. Various experiments can be designed to study the molecular mechanisms leading to the radiation induced effects.

Various experiments may be planned by choosing suitable projectiles with appropriate energies to irradiate the samples of interest. The dedicated beam line for Heavy Ion Radiation Biology is designed for experiments using low flux of accelerated particles. The irradiation is done using a computer controlled system called ASPIRE. The support laboratory includes cell culture facility and other equipment for sample preparation and post irradiation treatments and analysis.

The obtained data may be used for :

Lung malignancy is the foremost cause of cancer-related deaths globally and most of the lung tumours are inoperable and only choice is radio or chemotherapy. Majority of death occurs due to highly metastatic nature of lung cancer. Matrix metalloproteinases (MMPs) are key element in metastasis and their expression is extremely high in lung tumours compared with non-malignant lung tissue. Low LET photon radiation, in contrast to carbon ion radiation, can enhance the metastatic nature of cancer cells by increasing the expression and activities of MMPs leading to great difficulties in radiotherapy using gamma or X-rays. The signaling pathways EGFR/Akt/p38/ERK associated with activation of MMP-2 and MMP-9 in highly metastatic lung carcinoma A549 cells is studied after irradiation with carbon ion beam in present and absence of different PARP-1 inhibitors.

DNA G-quadruplexes are tertiary DNA structures that are formed by Hoogsteen base pairing between four Guanine residues. They are prevalent in G rich region of human DNA like telomere and promoter region of some oncogenes. G- quadruplex ligands can produce DNA damages and can inhibit synthesis of some oncoproteins. Now a day’s DNA G- quadruplexes become potential target for cancer drugs and many G-quadruplex ligands are now under clinical trial. On the other hand Carbon ion beam has several advantages over conventional ionising radiation in cancer treatment. Here the possibility of enhancing the efficacy of C beam therapy is being studied through radio sensitizing human lung cancer cell A549 with a well known G-quadruplex ligand Pyridostatin (PDS)

Autophagy is the waste disposal system of the cell, a cellular self eating process that uses lysosomes. The basic idea behind autophagy is that the body begins to eat itself (auto: self, and phage:eat), destroying or recycling its own damaged cell (proteins, mitochondria etc) so that new and healthy version can be built. However the field is new and much of the autophagy remains a mystery. Compared with other cell death processes, autophagy induced by radiation or anticancer drugs is less studied.

DNA damage has long been considered as primary target of radiation causing the detrimental effects. Emerging experimental evidence from recent years have accelerated research in understanding mitochondria as an important target for ionizing radiation and its significance of cellular radiation response. Mitochondria are highly dynamic organelles that are continuously undergoing fusion and fission and their function is directly linked to their polarization state. Mitochondria coordinate with other cell organelles and plays crucial roles in wide variety of cellular functions. It will be crucial to understand how alteration in mitochondrial structure, number and distribution affects cellular function, especially in cells exposed to high LET radiation. It has been shown that proton beam irradiation increases mitochondrial biogenesis and it has been proposed that targeting mitochondrial biogenesis may be a novel inhibitory mechanism for metastatic cancer metabolism. It has also been proposed that modulating mitochondrial dynamics fusion-fission can be a novel approach to enhance proton therapy efficacy in certain kind of cancers. However, there is not much evidence about the same. The current study intend to understand the effects of carbon beam on mitochondrial biogenesis and mitochondrial fission-fusion homeostasis and also to identify the similarities or/and contrast in the above mentioned processes in normal versus transformed cells and its modification after 12C beam exposure.

Ionizing radiation is known to cause considerable damage to cellular biomolecules, cells, tissues and organs. To understand the health risk posed by Ionizing Radiation in accidental scenarios, patient undergoing radiotherapy, and in space exploration projects, the research needs to be directed in understanding molecular mechanism of damage, so that preventive or therapeutic measures can be adopted. Development of safe and effective radiation countermeasure approaches; including radiation protectors, mitigators, and therapeutics are crucial and vital for the management of prospective scenarios (natural, accidental and/or terrorism) comprising high dose radiation exposure. In recent years, numerous radiation countermeasure agents have been reported, some of which are efficient but relatively toxic. It has been shown that MOS [mannan oligosaccharide] to be a potential modulator of biological effects of gamma radiation both at in vitro and in vivo levels. It has been shown that MOS pretreatment in immortalized normal cells reduces biological effects of γ-radiation and enhances the cell survival. MOS, as a radiation countermeasure agent may also be beneficial in case of planned radiotherapy events in cancer patients, and may also provide health benefits for space crew by minimizing damage caused by cosmic radiation.

The present study aims to examine the effects of MOS in modification in cellular response when exposed to 12C beam. TLR expressing cells, NKE (Normal Kidney epithelial cells) and A498 cells (Kidney Carcinoma) are being used in the study for evaluation of the predictive radio-protective efficacy of mannan along with possible mechanism of radiation protection after 12 C beam exposure. The study also aim to understand the mechanistic aspects of radiation response in both radiation protection and mitigation aspects.

This is a computer controlled system that enables one to irradiate cells placed on 35 mm petri dishes kept in medium in a sterile condition one after another at quick succession with predetermined particle dose.

The uniformity as well as fluence verification has been done using irradiating SSNTD [CN-85] and subsequent etching. The tracks were counted using microscope over accurately measured areas across the entire irradiation field of 40 mm diameter. The uniformity over a field of 40 mm diameter is having 2 % standard deviation. The mean fluence is within 1 % of the electronically measured value at the centre of the field. 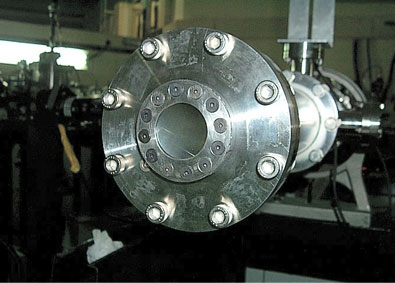 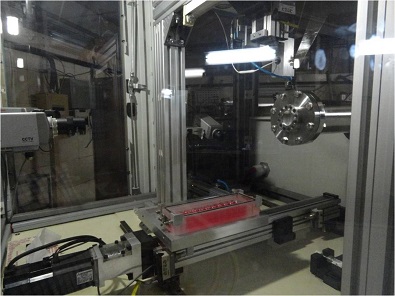 Console at the Data Room 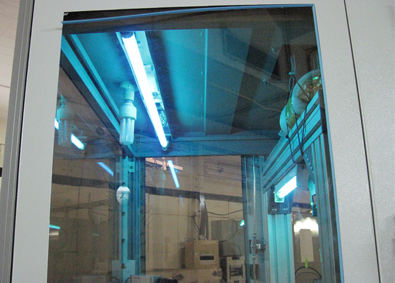 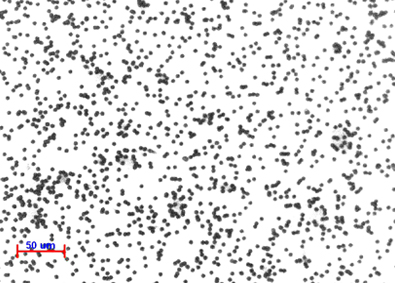 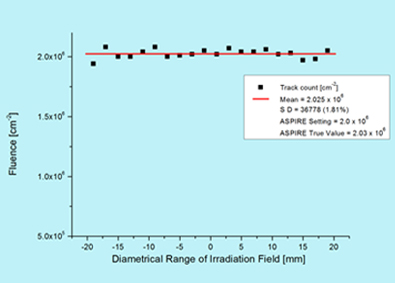 All the above values give a tentative picture in order to plan an experiment. The parameters may be adjusted and evaluated during the beam time. The available beam energy also depends on the machine condition during the run.

All the irradiation jobs are done at the atmospheric pressure. The samples have to be prepared in form of a monolayer. The attaching types of mammalian cells are grown on a 35 mm NUNC Petri-dish. The dishes are irradiated in a horizontal position. Non attaching cells can also be irradiated in the horizontal position using a special method. Irradiation with a pre-determined fluence and subsequent repetitions can be done using a the irradiation system called ASPIRE. 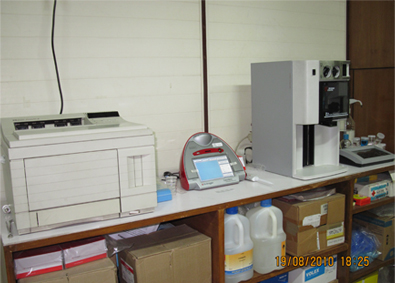 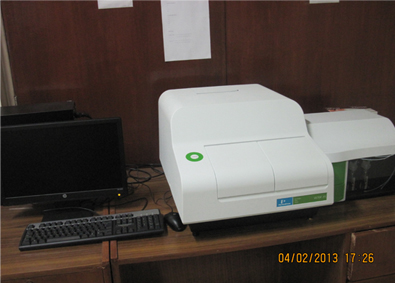 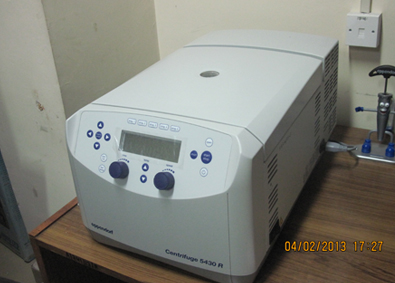 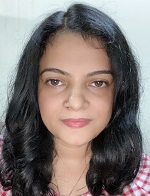