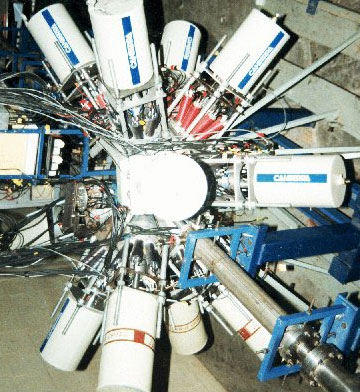 The facility has twelve HPGe detectors placed coaxially in the 'anticompton shields' at 45o, 99o and 153o with respect to the beam direction in two horizontal rings at ± 25o to the horizontal plane. 14 BGO detectors, seven above and seven below the scattering chamber in the 'honey comb structure' arrangement, cover about 35% of total solid angle at the target. These are used as total energy and/or multiplicity filter.

GDA has a 18 cm diameter scattering chamber equipped with a target ladder, two view ports and a collimator. Oil free vacuum is maintained in the chamber by a turbo molecular pump.

The high density electronics facilitates to acquire data in singles and in multiparameter mode, through a CAMAC interface. Data taken, generally, include:

The device, which has been in operation since 1994 for lifetime measurements (nanoseconds - picoseconds), was initially designed and fabricated by the Delhi University group. The RDD is routinely used in the GDA system along with the 14 element BGO multiplicity filter.

The main features of this device are as follows:

A full-fledged experiment with the full array was carried out to populate compound nucleus 79Rb by bombarding 110 MeV 28Si beam on 51V target. The proton and αa multiplicities, along with γ-γ coincidence spectra were recorded event by event. A large reduction in background was observed in particle gated spectra compared to singles (Eγ). The CPDA is suitable for identifying weak reaction channels and can be used for count rates upto 50,000 Hz. This project is funded by the Department of Science and Technology, Government of India.

This device is designed and fabricated by the Punjab University group. The spectrometer consists of five wedge shaped magnets with a thick lead absorber. For detecting the electrons, a Si(Li) detector is used. A facility test with the reaction 11B(124Sn, 5n)130Cs at 55 MeV beam energy was carried out in the GDA beamline with six Compton-suppressed germanium detectors. The conversion electrons from 130Cs were identified by gating with γs from the multiplicity filter. Now the facility is open for nuclear structure work at IUAC.

Ensemble of excited and aligned (perpendicular to the beam direction) nuclei is formed in nuclear reactions. The resulting anisotropic intensity distribution of γ-rays can be perturbed due to the extra-nuclear electromagnetic fields (through hyperfine interactions) depending on the lifetime of the excited state. The extracted perturbation factor, observed in the integral or differential mode with respect to time, is proportional to the product of the nuclear parameter (magnetic and quadrupole moments) and the atomic environment (magnetic field and electric field gradient due to electronic spin and charge distribution). The PAD technique is well established technique in most of the accelerator laboratories because of the following reasons:

(i) The static electromagnetic moments (crucial for the unambiguous nuclear structure information) of the excited states can be measured only through this technique.

(ii) As compared to the Mossbauer and the NMR techniques this is a very sensitive technique. For the problems in condensed matter physics, one can have very low concentration (to reduce the impurity – impurity interaction) of probe atoms of most of the elements with no limitation of the temperature.

The PAD facility at IUAC consists of angular correlation table, target chamber and a C-type electromagnet (to provide maximum 1.8 T magnetic field between the 1” pole gap). Both type of detectors, scintillator and semiconductor, can be mounted in the plane perpendicular to the magnetic field. In the past, main interest has been for the systematic investigations of the nuclear structure (configuration and the quadrupole deformation) and the decay mechanism of the K-isomers in Hf-Ta region. Now the PAD setup is redesigned and the experiments are planned for the nuclear moment measurements using the transient magnetic fields and the ionic state of the transitional impurities in dilute magnetic semiconductors.

An oil free vacuum station based on turbo molecular pump and diaphragm pump is set up in the GDA laboratory for annealing and evacuating the cryostats of HPGe detectors. This system is protected against power failures with solenoid activated valve. This annealing system has become the work station for HPGe detector maintenance activities.

An automatic liquid nitrogen filling system has been designed and made in-house, with a dedicated controller which controls a set of electro-pneumatic valves/sensors to fill the 12 HPGe detectors in proper sequence and in failsafe mode. The temperature readout from the sensors (platinum resistor - PT100 whose resistance varies linearly with temperature) is communicated to the PC through the ADC in the controller. The controller also has the relays to operate the 24 V dc solenoids of electro-pneumatic valves.

The filling system consists of dedicated manifolds for liquid nitrogen and compressed air on both sides of the beamline each catering to 6 detectors. The detectors are periodically and automatically filled once a day. Fill log is maintained in a logfile for monitoring purposes. Filling is done from a 200 l capacity LN2 dewar (at a pressure of 22 psig) which itself gets filled from a 5000 l dewar kept outside the Beam Hall, once in 2 days. The process is controlled by a GUI code working in linux environment. The configuration of the number of detectors, sensors, valves (enabled/disabled) are kept in the file 'lnfill.conf'. 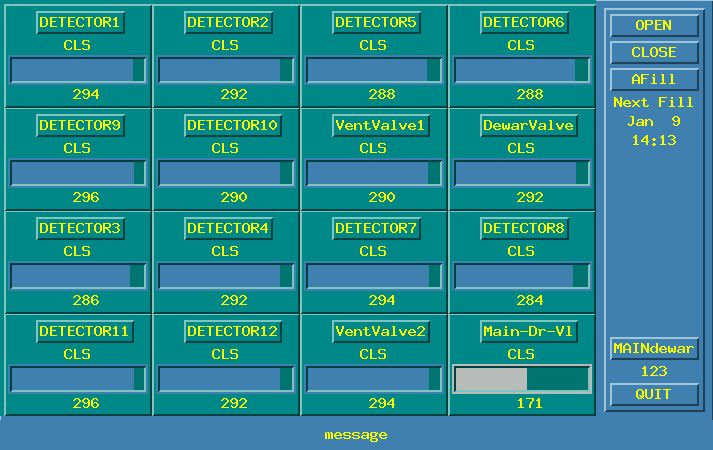 For the study of nuclear spectroscopy, the emphasis has mainly been on the study of high spin structure of vibrational nuclei and nuclei near shell closure. The systematics of high spin levels in nuclei in the mass region ~ 75, ~ 90, ~ 120, ~ 130 and ~ 160 have been carried out in the last few years to investigate the interplay of single particle, vibrational and rotational degrees of freedom and the co-existence of these structures.

A systematic study of nuclei near N=50 shell closure was carried out to understand the evolution of high spin structure in these nuclei. In contrast to nuclei near Z=50 shell closure, measurements in 92,93,94,95Tc, 95,96,97,98Ru and 95Rh indicate that these nuclei do not develop any rotational behaviour at high spin. The low lying levels of these nuclei are well described in terms of large basis shell model calculations using the f-p-g valency nucleons. These calculations have been extended by incorporating proton and neutron core excitation in a truncated model space. Calculations indicate that the levels up to J ~ 22 ħ and E* ~ 10 MeV can be attributed to the breaking of the N=50 core. Similar effects of core breaking for N=82 shell has been observed for the nucleus 149Dy. In contrast to N ~ 50 nuclei where the high spin structure is single particle in nature, the Z=50 nucleus 111Sn shows a rotational band at high spin. The transitional nuclei 99Rh and 100Pd have been observed to have a well-defined rotational behaviour.

The high spin structures of odd-odd Lu nuclei have been extensively studied. The energy levels of 164Lu through γ-spectroscopy have been established for the first time. Two strongly coupled bands were identified and tentatively assigned the configurations Ph11/2 [523]7/2- Ni13/2 [642]5/2+ and Ph11/2 [523]7/2- Nh9/2 [521]3/2-. The above assignments are consistent with the observed crossing frequencies, alignments and B(M1)/B(E2) ratios as compared to the neighbouring odd A nuclei. Measurements were also carried out for other odd-odd isotopes of Lu (162,168,170Lu) which show a gradual reduction of signature splitting with increasing neutron number.

Life time measurements in the γ-soft region (A ~ 70-80) have indicated a rapid change of nuclear shape with rotation and the shape polarisation effect of the occupied g9/2 proton and neutron orbitals. Identical bands have been observed in the nuclei 78Kr and 80Rb. The unravelling of the low spin structure, particularly the -ve parity sidebands, was facilitated by the use of the recoil mass separator.

A new high spin isomer (35/2-) with a life time of 8.6 ± 1.3 ns has been identified in 153Eu. Measurement of quadrupole moments of several nuclei have been carried out using the DSAM, RDM and hyperfine interaction studies. The current emphasis is on complete nuclear spectroscopy using information from γ-γ, e-γ and life time measurements. 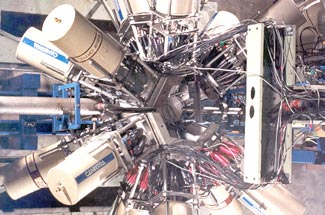 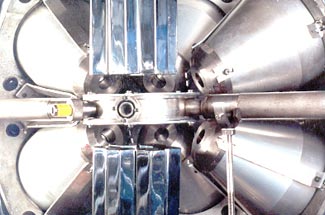 View All
Back to Top