The large array of neutron detectors, named National Array of Neutron Detectors (NAND) is a DST supported nuclear physics experimental facility set up at IUAC. The detector array consists of 100 liquid scintillators, each cell having 5"x5" cylindrical size and type BC501A ( Saint Gobain) coupled to 5" photo multiplier tube (Hamamatsu R4144). They are all mounted at a fixed flight distance of 175 cm from the target position. The detectors are mounted on a semi-spherical dome ( geodesic) structure optimized for the present geometry. The Target is placed in a thin walled spherical scattering chamber of 100 cm diameter. Target chamber also has provision to put charged particle detectors like large area position sensitive multiwire proportional counters (MWPC) and silicon detectors to detect neutron emitting sources (heavy ions and fission fragments) and other associated light charged particles in coincidence with neutrons.The full array will allow the measurement of energy and angular distribution of neutrons produced in the nucleus-nucleus collision.This array is planned particularly to study dynamics involved in heavy ion induced fusion-fission reactions near and above the Coulomb barrier.

Mechanical structure of the array

The semi-spherical structure that accommodates 100 neutron detectors around the spherical vacuum chamber, at a distance of 175cm from the target position, is made of Geo-desic dome design fabricated using mild steel pipe links and hubs. The hubs are made of rings and welded to the vertexes of the geodome. The design of whole structure is is optimized to have minimum materials with light weight and strong enough to accommodate 100 detectors. The detectors are distributed on right rings with each detector inserted into the hubs at the vertexes. The reaction plane ring and two other rings out of the plane at ± 15o with respect to the reaction plane contains 20 detectors on each ring.

The target chamber is a 100 cm diameter spherical chamber made of 4 mm thick stainless steel. The target ladder, located at the center of the chamber, can accommodate 5 targets including a beam-viewing quartz. Linear as well as rotary movement of the ladder is be possible. Inside the chamber there is an annular ring with four arms on which the fission detectors can be mounted. The arms can be rotated and the distance of fission detectors from the target can be varied. The chamber has separate flanges to accommodate vacuum feedthroughs and gas feedthroughs. 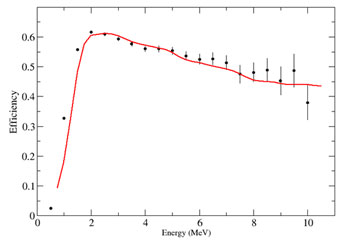 The detection efficiency of liquid scintillator neutron detectors is studied by measuring energy spectra of prompt neutrons from a 252Cf spontaneous fission neutron source. 252Cf emits evaporation neutrons from the fission fragments which has reproducible white energy spectrum. Neutron energy has been measured by time-of-flight (TOF) technique using fission fragment as start signal. A large area MWPC was used as start detector. Detectors of this type are highly efficient (~99%) for detecting heavy fragments and provides good intrinsic time resolution.Neutron energy spectra were obtained from the corresponding experimental TOF spectra using proper Jacobian transformation. Data were corrected for background, measured with shadow bar technique. Standard 252Cf source spectrum with temperature T=1.42, properly normalized with neutron multiplicity n=3.77, the neutron detector solid angle and the total number of ﬁssion detected, corrected for dead time loss and MWPC efﬁciency was used as a reference. The energy dependent efficiencies of neutron detectors were obtained by comparing the experimental and theoretical neutron energy spectra. Experimentally obtained efficiency was compared with the Monte Carlo simulation based computer code MODEFF. A good agreement was observed between the experimental and simulated efficiency of neutron detectors as shown in Fig. 1. 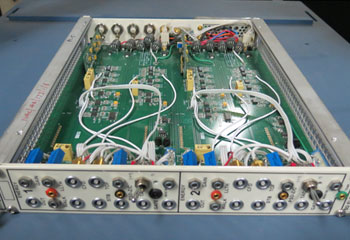 A single width dual channel NIM based integrated electronic module is fabricated to process neutron detector signals. The dynode and anode output from PMT are fed into the integrated electronics module which consists of pre-amplifier, shaper amplifier, CFD, PSD and TAC circuits built in it. This module adopts zero-cross technique for neutron-γ pulse shape discrimination. The shaper amplifier in this module, which has adjustable gain, gives a bipolar output of 1μs shaping time at the front panel. The incorporated CFD has front panel zero-cross and threshold adjustments. The module gives two fixed width CFD outputs; a prompt output and a delayed output to generate time of flight spectrum. It also provides a TAC signal corresponding to zero-crossing time distribution. There is provision to reject gamma (partially or fully) and the GATE out put generated after enabling the gamma rejection can be used to generate the master strobe for data collection logic. 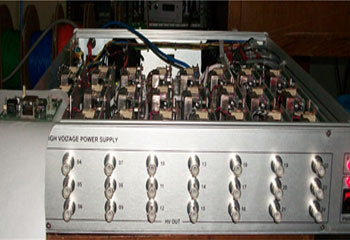 The emergence of a large array of detectors demands the development of custom made electronics modules, to overcome the cost of a large number of conventional electronics and power supplies etc. Each detector PMT requires high voltage less than −2000 V which is supplied through the base which contains resistor divider network. A home-made voltage divider base is developed which contains the voltage divider circuit as well as an integrated charge-sensitive preamplifier to collect the dynode signal. A compact high voltage power supply has been developed at IUAC which generates voltage upto −2000V using a compact DC–DC converter chip (PICO make) mounted on an Ethernet control board that can be remote-controlled over a private local area network (LAN). The controller set the high voltage by connecting to the control pin of the chip via a 0–5V programmable voltage through a digital-to-analog converter. A user-friendly graphical user interface using LabView framework is used to to control high voltage over the network. 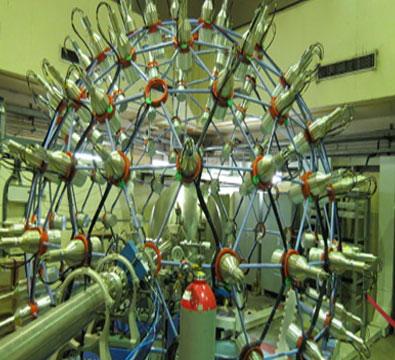 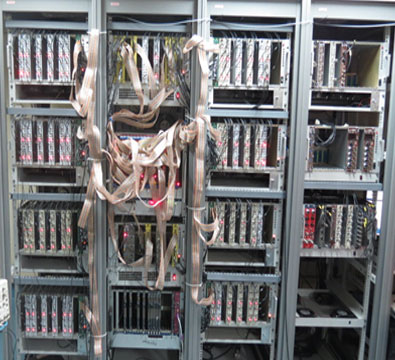 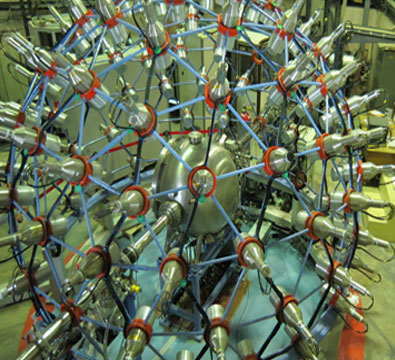 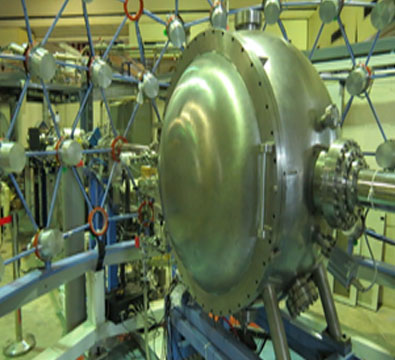 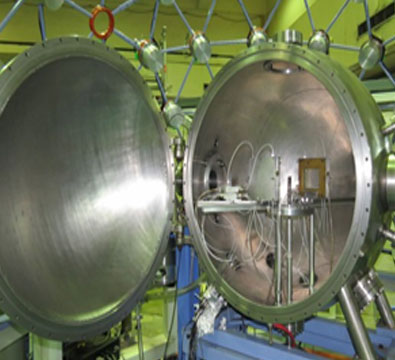